The bar chart below is based on just over 30,000 miles covered by our 2011 Leaf. A major component of the mileage which has gone into compiling the below, is dual carraigeway/motorway commuting. The WH/mile figures below are therefore higher than one might expect if one were driving a higher proportion of distances in 30mph and 40mph zones.

The energy used for the calculation of the below, is the electrical energy which has gone into the car in the last 32 months, as read off an electricity meter installed for the sole purpose of measuring energy used by the car, and so 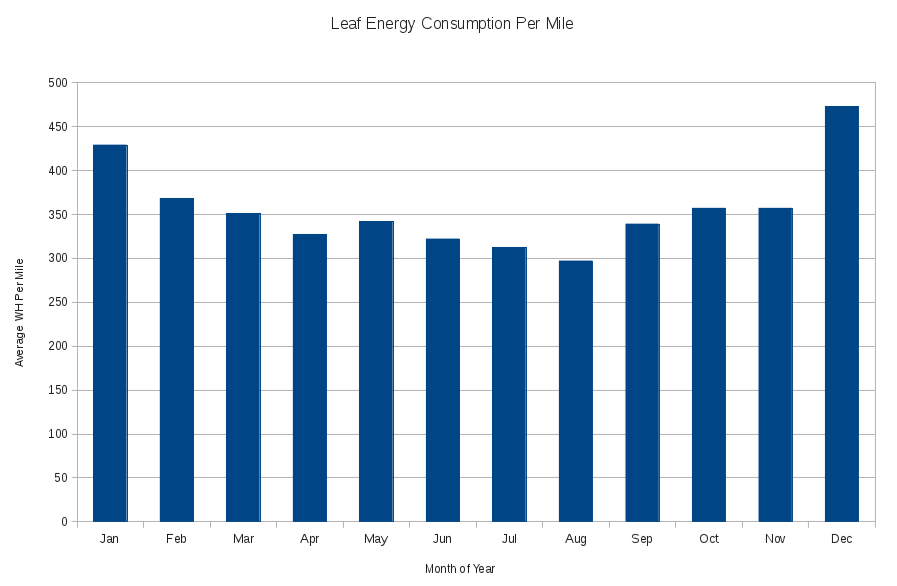 As the 2013 Leaf contains a heat pump (rather than crude heater) for cabin heating purposes, it is likely to have less seasonal variation in energy consumptions than our 2011 model (shown above).

I have pasted below the SQL used to compute the average Watt Hours per Mile figures shown in the above graph. The source tables in the below query contain meter reads and car odometer readings for dates. As someone elses SQL is not always the easiest to read, the approach taken by the query below is

As I have just finished working on the site I have commuted to for the last few years, the graph above uses data from as consistent a set of vehicle usage data as I am likely to have - in order words does not contain data from our revised vehicle usage pattern.